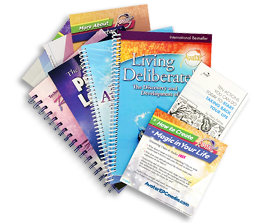 Consciousness is a tool and these books by Harry Palmer will show you how to use it. Learning to use your consciousness deliberately is the most rewarding ability you’ll ever develop.

The PowerUp Plus Pack includes all items in the Power Package plus Harry’s two newest books, The Avatar Path: The Way We Came and The Avatar Path 2: Private Lessons.

The Avatar Power Package includes: the two internationally best selling books, Living Deliberately: The Discovery and Development of Avatar, ReSurfacing®: Techniques for Exploring Consciousness, the Ten Actions booklet, the Home Study Checklist, a link to stream Avatar audio and video and information about how you can improve your life with The Avatar Course.

Click here for more information about The Avatar Course!